The lack of water has changed the rules of society as we knew it.
Those who have not yet died try to survive in a hostile and desolate environment.

Made of 72% water, human beings need to keep this percentage stable
in order to maintain the fragile balance upon which their lives depend. 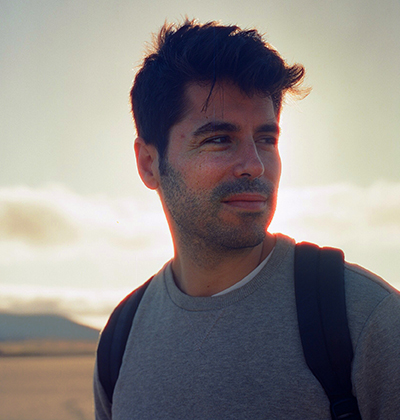 Lluís Quílez with his previous short-films “EL SIGUIENTE”, “AVATAR”, “YANINDARA” and GRAFFITI, he earned more than 160 international awards, including multiple Melies awards, Forqué, Goya and Oscar short-listed. After his first feature film debut «OUT OF THE DARK» (2015), Lluís Quílez goes back to short films producing and directing “72%”, a fantastic tale about humanity and the power of nature.

Ever since my first short film premiered in 2003 I have been exploring the possibilities of this form and viewing each of my projects as both a personal and an artistic challenge.
72% is the fifth short film I have directed. The need to create a fable about the human condition and to show our relationship with nature in magical and almost mystical terms helped me to find the necessary motivation to undertake this new project.

It is difficult to situate 72% in any genre. With a premise drawn from the cinema of survival as my starting point, the aim was not to develop action but to concentrate on the drama of a group of characters obliged to share the only element on which their lives depend: water.
72% is above all a fable with a touch of fantasy – a tale that requires the complicity of the viewer if it is to be deciphered and interpreted and thus fully understood.

In 72% everything turns on water: the element in which life is believed to have originated. In fact, the title is an allusion to the fact that we consist of more than 70% water. Beginning with this premise and the fact that human beings are essentially made of water, it seems logical to me that the end of our species will also be connected with this element. Possibly with its absence. That’s why I think it’s necessary to make viewers aware of its importance.

72%, like any audio-visual work, has its own identity and therefore ideology. But one attractive feature of the film, or one I find attractive, is that the story is not completely closed and that viewers can interpret and complete it with their own vision and ideas.
72% belongs to the kind of cinema that is more interested in asking questions than in giving answers. A kind of cinema that values and respects its viewers by giving them the option of reinterpreting their cinematic experience and becoming an essential part by completing the narrative from their personal point of view.

Some people will see religious, even Biblical references, while other viewers will simply see the story as a classic morality tale, and others as reinterpretation of the myth of eternal recurrence.

If they ask me, there is one idea that I think stands out above the others: the end is never the end, but the beginning of something new. This is undoubtedly the essential idea concerning hope and faith, themes that I dealt with in my previous short GRAFFITI, which also placed human beings on the verge of extinction. Nature surrounds us, preceded us and will prevail after us. It is simultaneously a CREATIVE and DESTRUCTIVE FORCE. And surely among the many mysteries it still hides are many of the answers to the questions that humanity been asking itself for centuries.